“My Son the Waiter” in Huntington Beach, “Middletown” in Anaheim 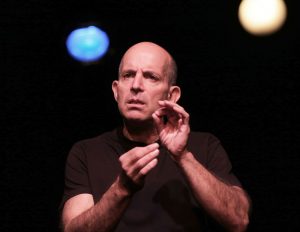 Brad Zimmerman in “My Son the Waiter.”

Will Eno’s “Middletown” (in its SoCal premiere at Anaheim’s Chance Theater through May 21) reminds you of Thornton Wilder’s celebrated “Our Town” from the get-go. This may or may not have been a conscious decision on Eno’s part but he’s trying to accomplish the same thing; the play is simple as well as profound, but not as profound as it endeavors to be. (A clever moment has actors portraying audience members, discussing the play and what it’s about).

What happens on stage is what might happen in any town on almost any given day: a librarian helping a patron find a book, a cop interrogating a drunk, a doctor telling a new mother her baby could grow up to be another Beethoven and suggesting she buy him a drum. There are some odd goings on and that’s as it should be in theatre; we can just watch TV if we want everything wrapped up in nice little packages.

What happens when a nice Jewish boy wants to be an actor but ends up shlepping soup instead? Brad Zimmerman provides the answer in “My Son the Waiter: A Jewish Tragedy” (at Huntington Beach Library Theater through May 14). This autobiographical one-man show is essentially standup comedy; the jokes fly fast and thick but writer-performer Zimmerman leavens the laughs with self-reflection and personalizes the shtick with family anecdotes.

Would a gentile enjoy the show? No question. But Jews will derive an extra level of meaning from it. “I’m as far from a practicing Jew as you can get,” we’re assured. “I’m one step above a Muslim.” The comic, a former opening act for Joan Rivers and George Carlin, uses a technique not unlike Jackie Mason—he circles around a target and keeps firing on it from all sides. The result is pretty much a dead hit on the collective funnybone.