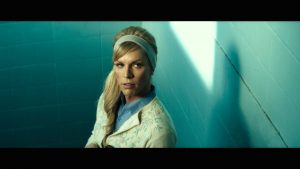 One of the great things about the annual Newport Beach Film Festival—which wrapped its 18th edition last week—is the abundance of short film programs. If you don’t like what you’re watching, wait a few minutes. You’re bound to see something like the clever animated “Anatomie” or the surreal “Dreamkeeper” that’ll knock your socks off.

Prison films have changed radically since “Cool Hand Luke” reinvented the genre 50 years ago. What Angela Shelton’s “Heart, Baby!” (which screened twice at the festival) lacks in a name-brand star like Paul Newman it makes up for in strong naturalistic acting that pulls you into its unlikely scenario—based on a true story. Though it contains a scene that is almost an homage to “Luke” with a woman using her body to tease a busload of prisoners, “Baby!” is a love story at heart and a singular one at that.

A powerfully built African American with a knockout punch in the boxing arena, George (Gbenga Akinnagbe) has been incarcerated since he robbed a house at age 18; his cellmate, Crystal (the charismatic Shawn-Caulin Young), is a white transgender female junkie. When George rejects a shot at competing in the 1984 Olympics, only his boyhood friend and fellow prisoner, Doc (Jackson Rathbone), can handle the truth of their relationship.

Though the brutality—stabbings, beatings and more—makes “Baby!” difficult to watch at times, this film about people who want acceptance on their own terms is as inspiring as it is uncompromising. (The true happy ending occurred off-camera during the making of the film when the real-life George and Doc were reunited.)

Another tale of forbidden love based on a true story is the award-winning “Tanna,” set on an island in the South Pacific (available on Blu-ray and DVD through Momentum/Sony, also Amazon Video and iTunes). The picture was Oscar-nominated this year for Best Foreign Language Film, the first time a movie from Australia has been represented in that category.

Dain (Mungau Dain) and Wawa (Marie Wawa) are lovers no less star-crossed than Romeo and Juliet; unfortunately they’re members of the same tribe, the Yakel, thus their relationship goes against age-old customs. When their shaman is killed by the rival Imedin tribe, Wawa is betrothed as a peace offering. None of the cast members had ever seen a movie before making “Tanna,” much less acted in one (Marceline Rofit nearly steals the picture as Wawa’s little sister Selin).

Written by Bentley Dean, Martin Butler and John Collee in collaboration with the people of Yakel, the film was directed by Dean and Butler. The excellence of the picture belies the simplicity with which it was made. Dean shot the film on a single Canon camera, with its batteries charged each night by a single solar panel; his photography is stunning.