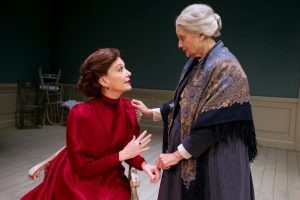 What happens when Nora Helmer returns home for a visit, 15 years after she walked out at the end of Henrik Ibsen’s “A Doll’s House”? Lucas Hnath has come up with a surprisingly satisfying answer in his sequel to the classic drama (at South Coast Repertory in Costa Mesa through April 30). “A Doll’s House, Part 2” filters the characters through modern sensibilities, though the play is set in the same period as the original; Nora has become a successful author, penning an autobiographical albeit slightly fictionalized novel about a woman unhappy in her marriage.

Shelley Butler’s minimal direction works because the writing is compelling enough to stand on its own. Shannon Cochran is a tower of strength as Nora, a performance matched by Lynn Milgrim as her housekeeper, Anne Marie, and Virginia Vale as her now adult daughter. Bill Geisslinger is fine as Torvald; Sara Ryung Clement’s costumes make a strong impression.

The 2017 Newport Beach Film Festival, which offers more than 350 films from some 50 countries, continues through April 27. Screenings take place at the Big Newport, Islands, Triangle and Lido cinemas, as in previous years. New Italian, Swedish, French, and German films vie for attention in the European Spotlight tonight at the Triangle.

Terence Davies’ “A Quiet Passion” (which opened at the Laemmle Royal in Los Angeles last week) offers up a markedly different portrait of Emily Dickinson from William Luce’s “The Belle of Amherst.” Writer-director Davies sets out to reveal the little known woman behind the familiar poems and largely succeeds, with Cynthia Nixon giving us a far more complex characterization than Julie Harris did so memorably in Luce’s beloved one-woman play.

“Passion” shows us where the poetry came from, and wanders into some dark corners in an attempt to humanize Dickinson. We see the young Emily growing up in an overtly religious household, with a strict no-nonsense father (a solid Keith Carradine), as well as the mature woman who rejects potential suitors as a matter of course, turning her back on love if she can’t have equality. Jennifer Ehle shines in support as Emily’s patient sister Vinnie.

A man who lives in the past is the heart and soul of a recent film by Tibetan filmmaker Pema Tseden. “Tharlo” (available on DVD from Icarus Films) tells the story of a sheepherder from rural Tibet who gets involved with an attractive hairdresser. The naturalistic acting draws the viewer in, but much of the film moves at a glacial pace. The original story by Tseden, included in a booklet, is itself a compelling read; curiously, one of the film’s best scenes, in which Tharlo sings a love song to the young lady in a karaoke bar, is only a single sentence in the story.