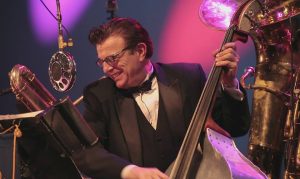 What do Woody Allen, Mel Brooks and Michael Feinstein know that most folks don’t? They’re all wild about, cannot do without Vince Giordano—when it comes to recreating the music of the 1920s and ‘30s and making it live for today, he’s “the top,” as Cole Porter would say. This guy eats and sleeps the sounds of the era, as vividly depicted in the new feature film documentary, “Vince Giordano: There’s a Future in the Past” (at Laemmle Theatres at L.A. through April 20).

Directed and produced by award-winning filmmakers Dave Davidson and Amber Edwards of Hudson West Productions, this is an outstanding portrait of the bandleader and bass player. The doc captures not only the glamour—the standing ovations, the delirious fans swing-dancing to the music—but the day-to-day grind of loading the instruments, booking the gigs, worrying about the sidemen that don’t show up.

Giordano grew up in the ‘50s listening to his grandparents’ record collection on their Victrola, until the music “became my calling and my religion.” It isn’t the money that drives the bandleader and his Nighthawks orchestra, it’s the passion, and that passion is abundantly clear in this film. By the way, if you’re in New York, you can hear them play their special brand of jazz live—as I’ve had the pleasure of doing—at Iguana NYC and elsewhere.

Laurel and Hardy on tour

Michael Ehret would no doubt approve of the Nighthawks’ theme song (“The Moon and You”) since it was written for his favorite comedy team. The German jazz drummer has put together an extraordinary volume with Nico Cartenstadt of Belgium, “Spot On: An Audiovisual Account of Laurel and Hardy’s 1952 British Tour.” The book, crammed with previously unpublished color and black & white photographs, is obviously the work of devoted fans. Included are essays by Danny Bacher and Glenn Mitchell, plus copies of typescripts, programs, ship manifests, letters and more. Ever wonder what their wardrobe trunks looked like? Check out the full-page color photos here.

L&H fans might be forgiven for thinking the last thing they need is yet another book on the comedians. But this one is occasioned by the serendipitous find of a lost recording of the sketch “On the Spot!,” which the team performed live in music halls after their film career ended. The two-part, 20-minute sketch is included on a CD, along with a short interview Laurel gave to a French radio station circa 1950. The handsome hardcover book and CD are available in a limited edition from Michael Ehret Publishing.

Speaking of limited editions, Bonaventure Press tells me “Laurel & Hardy: The Magic Behind the Movies–The Ultimate Edition” by my pal Randy Skretvedt, is close to selling out its first and only hardcover printing. Little known details of their films, deleted scenes from the scripts, recollections of their collaborators, information about the locations and musical scores, tons of rare photographs—small wonder fans call it The Bible.