“The Siegel” and Playwrights Festival in Costa Mesa, “Stupid Bird” in Long Beach 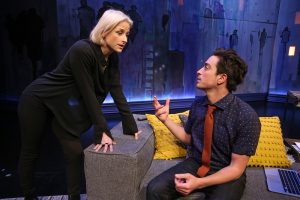 Mamie Gummer and Ben Feldman in “The Siegel.” Photo by Debora Robinson/SCR.

What if? That’s the question we all ask ourselves in the wee hours of the night, is it not? And that’s the proposition Michael Mitnick makes in “The Siegel” at South Coast Repertory in Costa Mesa (playing through April 23). What if you could take a second shot at something, a situation where you royally messed up–how would it play out?

Ethan Siegel, a determined young man, proposes marriage to his girlfriend Alice–two years after he broke up with her. Never mind that she has a boyfriend at present. Mitnick begins with this amusing off-kilter premise and builds on it with sharp wit and original dialogue. That he has a BA from Harvard and an MFA from Yale School of Drama will surprise no one.

“The Siegel” is part of SCR’s annual Pacific Playwrights Festival, which includes world premiere productions of “A Doll’s House, Part 2” by Lucas Hnath (which plays through April 30, and supposes 15 years have passed since Nora Helmer walked out on her family at the end of Henrik Ibsen’s classic 19th century drama) and “Yoga Play,” a comedy by Dipika Guha (April 19-30).

Anton Chekhov’s “The Seagull,” to which “The Siegel” makes oblique reference, is also the inspiration for a “retelling” called “Stupid F**king Bird” by Aaron Posner at The Garage Theatre in Long Beach (playing through April 29). The show, in which “a  young theatre artist tries to create a new form of theatre, to revolt against his mother, her generation, and their old ideas of art,” is set in 21st century America and directed by Matthew Anderson.