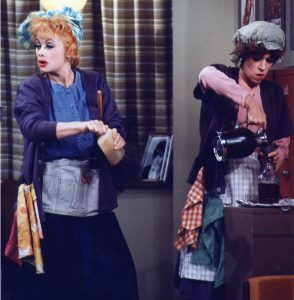 It’s hard to believe the theatrical juggernaut that is “A Funny Thing Happened on the Way to the Forum” almost wasn’t. When the Burt Shevelove-Larry Gelbart-Stephen Sondheim show first previewed on Broadway, audiences weren’t laughing; producers hurridly added some visual jokes to the opening number to convince people it was a comedy.

If you haven’t seen the show lately—or somehow haven’t seen it—the Southgate production at Brea’s Curtis Theatre (running through Apr. 9) is definitely worth a visit. Director Jonathan Infante keeps the farcical goings-on moving like a well-oiled machine. Scott K. Ratner, who heads up the show as Pseudolus, the sly, conniving slave who runs riot through ancient Rome, makes the long evening consistently fun; his bag of tricks includes a few that didn’t occur to the original producers.

Brian J. Cook looks a little too youthful and virile to play the henpecked head of the household who employs Pseudolus; similarly, Erich Schroeder is a bit too mature to be entirely convincing as Hero, his inexperienced son, who falls hopelessly in the love with the girl next door. Both however deliver the goods in performing their roles.

The rest of the ensemble is a mixed bag. Floyd Riggle is miscast as Pseudolus’ sidekick, Hysterium. Daniel Berlin seems wrong as Lycus—but a gay man who procures courtesans for a living would have no conflicts of interest, so his atypical approach works. Megan Cherry (Domina), Garry Hobday (Erronius), Kiana King (Tintinabula), Allison Aoun (Protean) are just right in their parts. Jo Monteleone’s musical direction is on solid ground.

If you like your entertainment vintage, you might want to time your visit to coincide with the wonderful silent movie poster exhibit next door at the City of Brea Art Gallery (running through Apr. 14).

“Carol + 2” (available on DVD from Time Life) is a long “lost” 1966 Carol Burnett TV special that co-stars her idol, Lucille Ball, along with Zero Mostel—who of course originated the role of Pseudolus in “Funny Thing.” The writing is exceptional, so it’s no surprise the show was written and produced by Nat Hiken, the genius behind “The Phil Silvers Show.”

Burnett is outstanding, proving even before her long-running series the sitcom sketch format that gave her a chance to play different characters, and play them broadly, was her forte; she also gets to sing. Zero does one good sketch with Carol and sings his evergreen “If I Were a Rich Man,” from “Fiddler on the Roof.”

Lucy is in top form here, including the memorable finale which has her and Carol playing cleaning ladies at the William Morris Agency and singing “Chutzpah!” No mention is made of Mostel’s 1943 film debut at MGM, which co-starred Ball—a missed opportunity for a bit together. Burnett’s 1972 special, “Once Upon a Mattress,” is a bonus on the disc.

Red was funnier in live performance than on TV but the shows hold up well. The writing is uneven, however; “Skelton viewed his writers as adversaries,” according to one I interviewed, Bob Weiskopf, and they hated him. There are lots of political jokes on these programs that still resonate. Wayne shines here, and his genuine affection for Skelton (and vice versa) is obvious. Conway proves he needs good material, like he enjoyed on the Burnett show (which he didn’t get on his outing with Skelton).