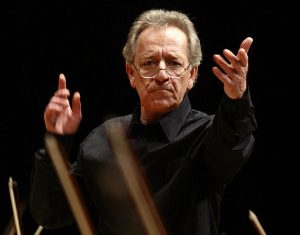 A friend once gave me a ticket he couldn’t use to a concert at Segerstrom Center for the Arts. I thought it was a lousy seat—front row, far right—until I realized it afforded me a terrific view of the conductor, who was so impassioned he was giving the most compelling performance I’ve ever seen on the podium. His name was Yuri Temirkanov and I’ve been looking forward to his return ever since; thanks to the Philharmonic Society he’s back in Costa Mesa this week.

The maestro will lead the St. Petersburg Philharmonic Orchestra  Wednesday at the Renee and Henry Segerstrom Concert Hall, marking the 50th anniversary of his debut with the orchestra (he’s been the Artistic Director and Chief Conductor since 1988). Temirkanov, renowned for his recordings of Tchaikovsky symphonies and Stravinsky ballets, conducts Prokofiev’s Violin Concerto No. 2 on this occasion, with Japanese violinist Sayaka Shoji joining the orchestra.

Selections from Prokofiev’s “Romeo and Juliet” and Ravel’s “Daphnis and Chloe, Suite No. 2” round out the Mar. 15 program. A pre-concert lecture by KUSC’s Rich Capparela begins at 7 p.m. with the concert following at 8 p.m. The National Symphony Orchestra of Ukraine marches into SCFTA Mar. 22 with Rachmaninoff’s Third Symphony.

South Coast Repertory commissions a lot of new work, bless them. Some of the results, like Qui Nguyen’s “Vietgone,” produce more satisfactory results than others, such as Aditi Brennan Kapil’s new “Orange” (at SCR through Mar. 26). The latter comedy-drama, about a home-schooled 17-year-old Indian girl searching for identity and yearning for adventure on a visit to Orange County, is as wild a ride as “Vietgone,” with some unexpected twists and turns—and even Disneyland fireworks—but isn’t ready for prime time.

“Orange” scores points with some off-kilter observations but teems with jokes about OC that were stale 20 years ago; there’s a lot of talk about gods, demons and aliens that doesn’t quite jell. Michael B. Raiford’s amateurish set design (apparently suggested by the playwright) doesn’t help.

Nonetheless, Jessica Kubzansky does an outstanding job of directing a three-member cast that would otherwise be lost in space. Pia Shah (as Leela, the innocent teen adventurer) and Karthik Srinivasan (a variety of male characters) deliver fine performances, and Anjali Bhimani (as Leela’s uptight mother, her out-of-control cousin and others) is nothing short of amazing.