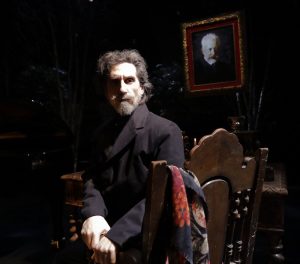 You may recall the wonderful 1949 Alec Guinness movie, “Kind Hearts and Coronets,” where Sir Alec plays eight members of the ill-fated D’Ascoyne family who stand between an ambitious young man and a fortune. Whether you’ve seen it or not, you won’t want to miss the consistently clever “A Gentleman’s Guide to Love & Murder” (at Segerstrom Center for the Arts through Mar. 5). It’s based on the Roy Horniman novel that begat the film, with book and lyrics by Robert L. Freedman, music and lyrics by Steven Lutvak.

Kevin Massey is smooth and slippery as Monty, the devious young fellow who plots his way to wealth, and John Rapson is highly entertaining as the D’Ysquith family, especially the two females. But the most talented cast members are Kristen Beth Williams as Monty’s lover Sibella, and Kristen Hahn as Phoebe, to whom he finally gives his heart.

This is no average road company, by the way. Director Darko Tresnjak, who deservedly won a Tony for the Broadway production, has brought not only Massey and Hahn with him from New York but almost his entire team, including scenic designer Alexander Dodge and choreographer Peggy Hickey.

Hershey Felder has returned to Laguna Playhouse with “Our Great Tchaikovsky,” portraying the beloved Russian composer who gave us “Swan Lake” and “The Nutcracker.” I’ve seen a half dozen of Felder’s unique one-man-and-a-piano solo shows, and I can only say, I haven’t had enough. The show, now in previews, opens Mar. 5 and runs through Mar. 26 in Laguna Beach.

Felder, who has brought George Gershwin, Chopin, Beethoven, Liszt, Leonard Bernstein and Irving Berlin back to life, is also reprising his popular “Great American Song Book Sing-Along” in Laguna for three performances (Mar. 14-21). “Tchaikovsky” was written by Felder, who supplies the scenic design as well. The show is directed by Trevor Hay, who previously directed Felder as Liszt and Berlin.