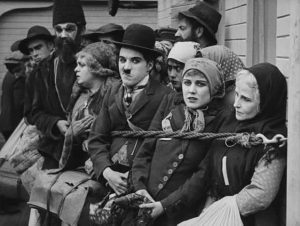 What’s black and white and fun all over? Silent movie comedies, of course. Charlie Chaplin, Stan Laurel and Oliver Hardy don’t show up that often on television these days, but they are en route to two family-friendly venues in So Cal. The comedians will be partnered live by two of today’s best piano accompanists and composers, Ben Model and Michael D. Mortilla.

Chaplin became the most famous man in the world within a year of his film debut in 1914; Laurel and Hardy were paired up in 1927 and remain the greatest of all comedy teams. If you think today’s kids wouldn’t appreciate the antics of these vintage funsters, you’re wrong—more then 700 schoolchildren laughed themselves silly last weekend at one of Model’s shows in Boise, Idaho.

Fullerton’s Muckenthaler Cultural Center is offering “A Charlie Chaplin Valentine” Feb. 16, including three Chaplin shorts, “The Floorwalker” (1916), “The Immigrant” (1917), and “Behind the Screen” (1916). Music will be provided by Mortilla, the former touring pianist for the Martha Graham Dance Company who’s busy hopping between The Academy of Motion Picture Arts & Sciences, Turner Classic Movies, The Getty Center, and other venues these days.

La Mirada Theatre for the Performing Arts will present “Silent Slapstick” as part of their Programs for Young Audiences series on Mar. 26. Model, resident film accompanist at New York’s Museum of Modern Art and the Library of Congress, who’s also heard on TCM, YouTube and his own indie DVD label Undercrank Productions, will improvise scores for three short comedies, including those of Chaplin, and Laurel and Hardy.

Chaplin will also make an appearance at the City of Brea Art Gallery. The city will jumpstart their centennial celebrations with The Birth of Motion Pictures, a large exhibition of silent movie posters and memorabilia dating from 1910-1929. A red-carpet, black-tie reception Feb. 18 from 6-10 p.m. with cocktails, live music and silent film screenings kicks off the exhibit (running at the newly renovated gallery through Apr. 14). Posters from Academy Award-winning films and one of the few Oscars ever given to a silent film are among the items on loan from the private collection of Dwight Manley.

Another star of the silent era, Hollywood “It” girl Clara Bow, is newly on view in a sparkling 4k restoration of 1927’s “Children of Divorce”(available on Blu-ray/DVD from Flicker Alley). Bow gives a fine performance as a girl who rejects a poor man to marry a rich guy (Gary Cooper in his first starring role), who’s been turned down by her childhood friend (Esther Ralston). The first-rate documentary on Bow, “Discovering the It Girl,” is a bonus here; this release, in partnership with Blackhawk Films Collection, was among the last projects of silent film preservationist David Shepard, who died in January.