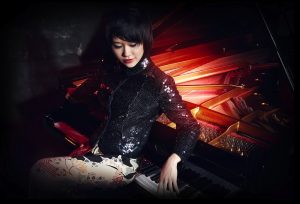 What would happen if Rex Harrison and Robert Preston met in a taxi on the way to the theatre one night in 1957 and ended up playing each other’s roles—Harrison in “The Music Man” and Preston in “My Fair Lady”?! That’s the clever premise behind “Rex and Bob’s Excellent Misadventure” by Bill Lewis (now in its world premiere at Anaheim’s Stage Door Repertory Theatre through Feb. 11).

Like most musicals this one is thinly plotted but long on song. In essence it’s a mash-up of the two evergreen classics, stuffed with parodies of the shows’ popular musical numbers. Most are highly entertaining, with few clunkers in the mix; the only real problem with “Misadventure” is that it simply goes on too long, especially Act I.

Andrew Ableson’s Harrison (or rather Harrington, as he’s called here) and Robert Standley’s Preston (or Prestone) are more than capable actors, pulling off their roles with aplomb under Bill Lewis’ smooth direction. Charlotte Carpenter Lewis is as charming as she is tuneful, as leading lady to both (alternating as Liza Whodiddle and Marian Laroo). Nick Santa Maria and Scott K. Ratner take turns stealing the show in a variety of supporting roles.

The Philharmonic Society of OC will present Pianist Yuja Wang Sunday Feb. 12 at Renée and Henry Segerstrom Concert Hall, with violinist Leonidas Kavakos. The 29-year old Beijing-born performer is beginning to attract as much attention for her musicianship as for her fashion sense, as well she should; the Los Angeles Times recently declared: “Hers is a nonchalant, brilliant keyboard virtuosity that would have made both Prokofiev (who was a great pianist) and even the fabled Horowitz jealous.”

Wang, who appeared in such storied venues as Salzburg, Wolftrap, and Tanglewood last year, is slated for a major solo European recital tour in March and April, with concerts in Paris, London, Amsterdam, Vienna and Berlin, among others. Kavakos, winner of the 2014 Gramophone Artist of the Year Award, has been praised by the New York Times for his “balance of pyrotechnics and lyricism.”

Sunday’s concert, part of the duo’s extensive tours of Europe and the U.S., will include the following selections: Janácek’s Sonata, Schubert: Fantasy in C major, Debussy’s Sonata in G minor, and Bartók’s Sonata No. 1 in C-sharp minor. Prior to the 7 p.m. concert Brian Lauritzen will present a pre-concert lecture at 6. The concert is part of the Henry T. Segerstrom Legacy Series.