Durang’s “Vanya and Sonia…” in Fullerton, much ado about writers and writing in Sierra Madre 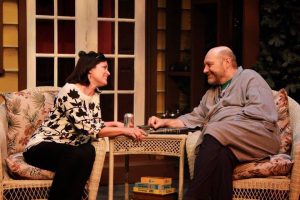 Mo Arii and Joe Parrish in “Vanya and Sonia and Masha and Spike” (courtesy STAGEStheatre).

Christopher Durang’s “Vanya and Sonia and Masha and Spike” (at Fullerton’s STAGEStheatre through Jan. 29) is one very entertaining play. It gets pretty silly at times but a little profound as well, right about the seventh-inning stretch. It starts out with an incisively funny portrait of sibling rivalry and ends up with a heartfelt meditation on change and a yearning for the things we’ve lost. Along the way there are more jokes and pop culture references (Chekhov, method acting, movies, etc.) than you can absorb in one sitting.

Durang writes wonderfully complex characters that make actors want to play them, and great monologues to challenge them; it’s no surprise the play won a Tony Award. He also skates by with things lesser-known playwrights could never get away with, like a repetitious amount of name-dropping.

Director Gray Krinke has assembled a fine ensemble cast to do his bidding, guiding first-rate performances by Joe Parrish as the cranky Vanya who mourns the past; Cynthia Ryanen as his adopted, bitter sister who regrets it; Mo Arii as Masha, their glamorous but needy movie-star sibling; and Keri Hellmuth as housekeeper-soothsayer Cassandra. Wolfgang Novogratz is amusing as Masha’s boytoy, aspiring actor Spike; Katie Raymond does what she can with the one-dimensional role of starstruck neighbor Nina.

A revival of Durang’s “Beyond Therapy” has quietly opened at Modjeska Playhouse in Lake Forest, where it runs through Feb. 12… Meanwhile, Sierra Madre Playhouse in Sierra Madre (near Pasadena) is staging “Bee-luther-hatchee” by Thomas Gibbons, “a story of writers and writing, stories that deserve to be told, and the issue of who is best to tell them.” The play (through Feb. 18) “provokes discussion on race, identity, and the power of writing.” The Playhouse is also presenting a concurrent series of panel discussions on Writers and Diversity on consecutive Thursday nights; all events in the series are free to the public.