“Roomate” at South Coast Rep, “Bakersfield Mist” back at Fountain, “Margarita” on DVD 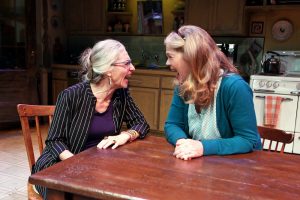 Tessa Auberjonois and Linda Gehringer in “The Roommate.” Photo by Debora Robinson/SCR.

Two women living together, reinventing life after marriage. Neil Simon found the idea fruitful when he reworked “The Odd Couple” for female actors. Now Jen Silverman has turned the construct on its head in her new play “The Roomate” (at South Coast Repertory in Costa Mesa through Jan. 22). Her twosome are not friends, as in Simon’s comedy of errors, but a pair of divorcees at loose ends brought together by convenience—an empty-nester renting out a room to a younger woman on the run from her messy past.

Most pointedly, Silverman has reinvigorated the concept with a millennial sensibility befitting her youth. Sharon (the always wonderful Linda Gehringer) is stunned by Robyn (the ever resourceful Tessa Auberjonois); she’s apparently never met a lesbian, let alone a lesbian vegan slam poet. Though they come from different worlds, the very private Robyn ultimately has a surprising effect on the warm, outgoing Sharon, acting as a catalyst for change and growth. SCR co-founder Martin Benson directs with a knowing hand that keeps the ball moving at all times.

Stephen Sachs has revived his riotously funny “Bakersfield Mist” with its original cast (through Feb. 26 at Los Angeles’ Fountain Theatre). As noted in my 2011 review:

Jenny O’Hara is ex-bartender Maude Gutman, who lives in a chotchke-filled trailer and believes “an ugly piece of crap” she bought in a thrift store for $3 is really an unknown work by Jackson Pollock worth millions. Nick Ullett is stuffy New York art expert Lionel Percy, who has come to examine the work…O’Hara and Ullett milk every ounce of comic gold under Sachs’ deft direction, as the play moves from sophisticated serio-comedy to knockabout farce and back. “Mist” is nothing less than an 85-minute master class for actors, and an unqualified joy for everyone else.

You’ll never view people with cerebral palsy—or disability in general—the same way again after you’ve seen “Margarita with a Straw.” The strength of this seriocomic indie (available on DVD from Wolfe Video) is Shonali Bose’s sensitive script and direction, and the naturalistic acting. Kalki Koechlin is outstanding as Laila, a college student with CP who wants to explore her sexuality with the same freedom she enjoys in developing her musical talent; Sayani Gupta is equally credible as Khanum, a blind Paki girl who befriends her.