“Elf The Musical” in Costa Mesa 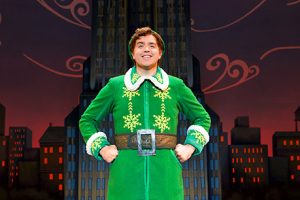 Sam Hartley in “Elf The Musical.” Photo by Jeremy Daniel.

Much like a modern day “White Christmas,” “Elf The Musical” (now at Segerstrom Center for the Arts through Sunday, January 1, 2017) seems destined to become an annual holiday family delight. The performances, the songs, the dancing and choreography, and the moving sets which enable the scene transitions all combine to produce a wonderfully entertaining evening. (The audience is invited to enhance the experience by donning “Buddy” sweaters and other Elf-wear, as many did on opening night).

Sam Hartley and Marie Lemon entertain deliciously as the show’s Buddy and Emily without imitating the 2003 movie version of “Elf.” Lemon is so petite, who could have predicted she has such an awesome voice? Hartley is smart enough not to attempt Will Ferrell’s hysterical “It’s Santa!” moments; he just allows the material to be funny and not attempt mimicry, which likely would not have worked well. His own sunny disposition shines through and permits the stage Buddy to be a bit different and just entertain us with acting, song, and dance.

So, do not go to “Elf The Musical” expecting it to be the movie with added soundtrack selections. The moments specific to Will Ferrell and Bob Newhart, which were so very hysterical on the screen, are not here. The musical instead gives us amazing song and dance numbers with fabulous sets which make the transitions flow. Ryan Gregory Thurman, who stands out as the Store Manager early in the show, later nestles into the Ensemble as one of the Fake Santas and kicks it in a superb rendition of “Nobody Cares About Santa.”