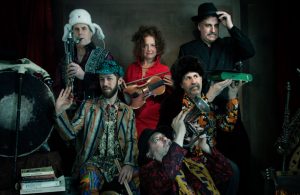 Klezmer music has been described variously as Jewish party music, Jewish soul music, Jewish roots music and Jewish jazz. I’m in tune with any and all of these definitions. I’m not sure I’d agree with Time Out New York that The Klezmatics are “the best band in the klezmer vanguard” or “among the greatest bands on the planet.” The hip, East Village-based group may well be the edgiest klez band out there, as witness the title of their third album, “Jews With Horns.” That was two decades ago; they’ve continued to push the envelope ever since.

The Klezmatics Hanukkah Concert (tonight at the Segerstrom Center for the Arts in Costa Mesa) brings the Grammy-winning band to SCFTA for the first time, with music from their new, 30th anniversary album, “Apikorsim/Heretics.” The group chose the title for many reasons: “political, philosophical and philological,” says trumpeter Frank London. “Apikorsim—heretics, rebels, questioners—are people who do not conform to established attitudes and challenge orthodox opinions. And The Klezmatics are decidedly unorthodox.” Woody Guthrie’s Hanukkah songs, previously recorded by the group, are expected as part of the program as well.

I grew up watching George Burns and Gracie Allen reruns on television, in an era when Jews in the entertainment field were very much in the closet. Burns was the first person in show biz to encourage me as a writer when I was 18, before I had ever sold a word—so now I’ve returned the favor with The Burns and Allen Chanukah Special (yes, there are many spellings of the holiday). George didn’t do Jewish material of course and his wife, Gracie, was a gentile; my ebook imagines what might’ve happened if they’d considered leaving their comfort zone.

January brings the Segerstrom Center’s wonderfully eclectic Off Center Festival back for another go-round, with its decidedly offbeat bill of fare. Marga Gomez, who made her OC debut at SCFTA with her play “Lovebirds” in 2015, is back with her autobiographical “Latin Standards”(Jan. 19-21)—direct from its world premiere in New York at The Public Theater’s Under the Radar Festival. Her latest one-woman show recounts what happens when the daughter of a Cuban entertainer produces a hipster comedy night at a Latino drag queen club during San Francisco’s gentrification crisis.

The edgy solo performer describes her show as a “true story of perseverance and creative addiction passed down from immigrant father to lesbian daughter,” depicting unforgettable characters from her past in 1960s Manhattan and present day San Francisco. She also incorporates “dance tunes that reveled in jealousy and obsession,” written by her late father, comedian/entrepreneur Willy Chevalier. Never heard of Gomez or Chevalier? Don’t identify as neither Latino or gay? Having seen the lady in action, I can only tell you her show is a must-see.