Bach’s Brandenburg Concertos in Costa Mesa, Chaplin vs. the Nazis in Beverly Hills 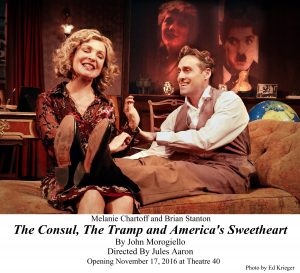 Can’t make it to New York City this week? Lucky for us, the Philharmonic Society is bringing The Chamber Music Society of Lincoln Center to Orange County. And Wednesday evening’s (Dec. 14) offering at the Segerstrom Center for the Arts in Costa Mesa is no ordinary holiday gift; the ensemble is performing Bach’s complete Brandenburg Concertos.

Tickets will cost you a bit more than the composer himself earned for these beloved orchestral compositions; in fact he was never paid or thanked for the works he presented to the Margrave of Brandenburg in 1721. Bach wrote the six lively concertos for chamber orchestra—considered among the best of the Baroque era—during one of the most productive periods of his life.

At the time, the composer was music director for the small town of Coethen, about 90 miles north of Berlin, where the first performances of the works were given. The Brandenburg Concertos, which Bach compiled and reworked from short instrumental sinfonias and concerto movements of his, were named not by the composer but his biographer Philipp Spitta, 150 years after he fact.

“The Consul, The Tramp and America’s Sweetheart” may well be the best play ever written for Hollywood history buffs and unquestionably for fans of Charles Chaplin, for whom it’s a must-see. It’s also a clumsy title that portends some awkward dramatic moments. As it stands, John Morogiello’s 90-minute one-act about the backstory of “The Great Dictator” (at Theatre 40 in Beverly Hills through Dec. 18) is a problematic seriocomedy with some sparkling moments.

Familiarity with Chaplin is not a prerequisite. If you’ve never seen one of his films you’re missing some of the greatest movies ever made, but you’ll still enjoy this play—assuming you have the slightest interest in American history, World War II, or the freedom of speech. It’s a timely drama about a famous comedian who dares to make a mockery of a much abhorred world leader at a crucial moment. And it’s based on a true story—the Nazis really did have a point man in Hollywood who dictated what could be depicted on screen.

The best thing about this production is Brian Stanton’s portrayal of Chaplin—a stunning evocation of the funnyman, the filmmaker and the social conscience, acted with sublime physicality. Charlie’s friend and business partner, former silent movie darling Mary Pickford, fares less well as played by Melanie Chartoff; she’s more than credible but looks about 20 years older than the actress would have been in 1939. Shawn Savage and Laura Lee Walsh offer fine support, respectively, as the Nazi consul and Pickford’s secretary.

The major flaw in Morogiello’s drama is an excess of background information in the secretary’s asides to the audience—TMI, as they say. It’s the kind of stuff you’re taught to excise in Playwrighting 101; if not, you end up with a lecture instead of a play. Jules Aaron’s otherwise highly effective direction makes these pedantic moments even more ostentatious, unfortunately, and there are too many of them to ignore.