Much ado about Samuel Beckett in books, lost noir “Private Property” on DVD 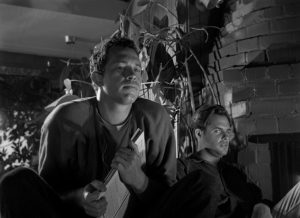 It’s easy to see how a film like “Private Property” (1960) fell through the cracks, going almost unnoticed on its original release and promptly disappearing. After all, few people had heard of writer-director Leslie Stevens (creator of TV’s “The Outer Limits”) or his stars—Kate Manx (who happened to be his wife), Corey Allen and Warren Oates. The indie movement was nowheresville, and who wanted to see Neo Hitchcock the year “Psycho” came out?

Happily, this forgotten gem has been rediscovered, restored and issued in a Blu-ray/DVD combo (available from Cinelicious Pics). Allen (James Dean’s rival in “Rebel Without a Cause”) and Oates (who of course went on to make a name or himself in films like “The Wild Bunch”) are two lowlife creeps who slither into Manx’s picture-perfect but lonely and bored existence, in this tightly-wound film noir that doesn’t waste a second of its 79-minute running time. I’ll leave the rest to your imagination; let’s just say it anticipates the early work of Polanski (who was still in film school at the time) in a startling way.

Polanski is not mentioned in “Beckett in Popular Culture: Essays on a Postmodern Icon” (available in paperback from McFarland & Co.) as well he should. But the playwright who gave us “Waiting for Godot” has had much greater influence on our culture than most people suspect, according to this intriguing volume of essays edited by P.J. Murphy and Nick Pawliuk. Filmmakers Christopher Guest (“Waiting for Gutman”) and David Cronenberg, pop musician Bono, science fiction writers Philip K. Dick and Dean Koontz, novelist Paul Auster, the TV drama “China Beach” and of course that sitcom about nothing, “Seinfeld,” are among the many examples cited.

The volume fails to mention the world’s greatest comedy team, but my ebook “Laurel & Hardy Meet Samuel Beckett: The Roots of Waiting for Godot” (available on Amazon) picks up where it leaves off. Renowned Beckett interpreter Barry McGovern of Dublin’s Gate Theatre has endorsed it as “an excellent piece of work.”

Auster supplies the preface for Barney Rosset’s “Dear Mr. Beckett: Letters from the Publisher” (to be published in January, in paperback from Opus) in which he pays due tribute to Rosset—“the one-in-a-million” director of Grove Press who became Beckett’s American publisher after establishing himself with the likes of Henry Miller’s “Tropic of Cancer.”

This 480-page tome not only gives us facsimiles of communiqués between these two men of letters but much more, including correspondence from Susan Sontag about producing “Godot” in Sarajevo, and an interview with Beckett’s French publisher in which the latter recalls informing him he had won the Nobel Prize: “…it was as though I told him about somebody’s death…I said to him, ‘Excuse me, I am going to give you some very bad news…’ ”