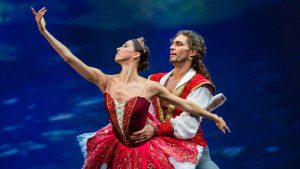 “Le Corsaire,” a tale of romance between a pirate and a slave girl, is an age-old staple of the ballet repertoire. It was inspired not by the Verdi opera of the same name but a poem written by Lord Byron in 1814. The Mikhailovsky Ballet production of the ballet, opening Friday at the Segerstrom Center for the Arts in Costa Mesa (playing through Sunday Nov. 20) is Konstantin Sergeyev’s version first staged in the 1970s and revised in the ‘90s.

The ballet has a long and glorious history as you might suspect. Sergeyev, who revived a many a classical ballet in the Soviet era, was influenced by the 19th century choreography of Marius Petipa and others. The first “Le Corsaire” ballet, created by choreographer Giovanni Galzerano, premiered in Milan 190 years ago—two decades before the Verdi opera. The Mikhailovsky (Maly) Ballet itself dates to 1933.

By the way, if one of the dancers looks like a Yank, he is—Julian MacKay, who hails from Montana, trained at the Moscow State Ballet Academy before joining the company earlier this year. He’s already an award-winning dancer and has taken part in several international galas.

Mikhail Messerer, Ballet Master in Chief of the Mikhailovsky Theatre, began as a dancer, training at The Bolshoi Ballet School. As it happens, the school is featured in the newly restored travelogue “Cinerama’s Russian Adventure” (released this week on Blu-ray and DVD from Flicker Alley). The Bolshoi itself is seen performing excerpts from “Giselle,” “The Nutcracker” and “Othello.” There’s a fair amount of time devoted to Russian folk dance or “character dance” as well, by the acclaimed Moiseyev Dancers (in traditional costumes, natch).

“Russian Adventure” (1966) was shot over an eight-year period. There’s an extended visit to the Moscow State Circus with its acrobats and its top clown Oleg Popov; we also see the Kremlin, the modern Moscow subway system, an antelope round-up, a bulldozer toppling trees in Siberia, a mischievous bear, and a whale hunting expedition (complete with an overly graphic slaughter). The famed State Hermitage Museum in St. Petersburg is oddly ignored. Bing Crosby exudes a folksy, inviting charm as the narrator, though Theodore Bikel would have been a more logical choice.

“The Best of Cinerama” (also on Blu-ray and DVD from Flicker Alley), like “Russian,” is presented in Smilebox Curved Screen Simulation to replicate its original three-panel look. This 1962 compilation includes the eye-catching roller coaster ride from “This is Cinerama,” newly restored, and scenes from other “Cinerama” travelogues that galavant around the globe. Among the copious bonus features on both releases are theatrical trailers, restoration demos, and facsimiles of the original souvenir program booklets.