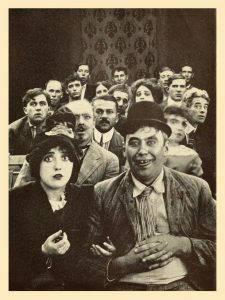 “The most important thing in my life was a girl,” film comedy pioneer Mack Sennett truthfully observed in his myth-filled autobiography. Sadly, the girl’s own legacy has been largely tarnished and obscured by scandal, rumors and lies. Timothy Dean Lefler’s “Mabel Normand: The Life and Career of a Hollywood Macap” (available from McFarland & Co. in paperback) is an honest attempt to rediscover the girl from Staten Island who became a celebrated silent film comedienne before life in the fast lane caught up with her at age 37.

Lefler’s bio of the star best known for her short films with Charles Chaplin and Roscoe “Fatty” Arbuckle is full of unexpected stories: Mabel’s days as a teenaged fashion model, the afternoon she raised $12,500 in liberty bonds by selling kisses, risking life and limb at the behest of a reckless Sennett, her comeback with Hal Roach Studios, even her testimony to the coroner in the William Desmond Taylor murder scandal that wrecked her career, despite her innocence. In short, this book is a good way to spend some quality time with Mabel.

For comedy connoisseurs, “Found at Mostly Lost” (on DVD from Undercrank Productions) offers 11 rarities unearthed at the Library of Congress’ annual identification workshop. Famous? No. Mostly funny? Yes. Such lesser known silent comics as Snub Pollard, Hank Mann and Monte Banks rule the roost here, but the arguable highlight is William Frawley (yes, Fred Mertz!) in his probably film debut, a 1927 sound short in which he does his vaudeville act. The films are accompanied by Philip Carli, Ben Model and Andrew E. Simpson.

Model likewise supplies the musical scores for Vol. 4 in his “Accidentally Preserved” series (also on DVD from Undercrank). Unlike the previous volumes of obscure silent shorts in this wonderful series, this one is a showcase for the 9.5mm format—the home video of the 1920s. These forgotten gems come from the USC Hugh M. Hefner Moving Image Archive (yes, that Hugh Hefner, who’s funded many a film preservation effort) and feature Colleen Moore and Warner Baxter in a fragment of a 1922 film, D.W. Griffith star Mae Marsh, comics Glenn Tryon and Bobby Ray, and others.