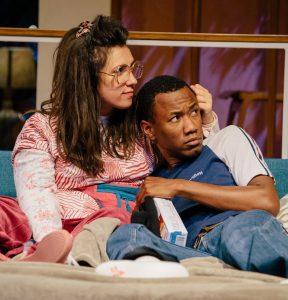 Donald Margulies may be one of our best contemporary playwrights, but he had to start somewhere. Among his earliest efforts is “The Model Apartment,” now playing in a revival at the Geffen Playhouse in Westwood through Nov. 20. It’s one strange duck of a play, a bizarre blend of family drama, screwball comedy, nostalgia, fantasy and surrealism that careens wildly from one style to another and back like a vehicle out of control. It’s fascinating to visualize young Margulies experimenting, trying to determine what works on stage, what doesn’t, and what he can get away with; in the end it doesn’t quite fly despite the Geffen’s valiant efforts, but you have to admire the theatre—where he’s something of a favorite—for taking chances.

The play takes place in a Florida condo, where a pair of senior citizens have come to spend their retirement years in the lap of luxury. That they are New York Jews is almost immediately apparent; that also they happen to be Holocaust survivors (or appear to be, for everything that takes place is open to question) is not immediately obvious. When their plump, ungainly daughter shows up uninvited we’re thrust into a wacky farce, which soon grows dark when the skeletons of the past rear their ugly heads in nightmarish fashion.

It’s to director Marya Mazor’s credit that she keeps the show from going off the tracks, where a less-experienced director might well falter. Whatever else the four actor-five character piece is a triumph for Annika Marks, who plays two radically different daughters with such finesse one actor seems to be missing from the curtain call. Marilyn Fox and Michael Mantell acquit themselves admirably with the material, taking a leap of faith with it into dark corners where the ground doesn’t always support them. Giovanni Adams plays the unlikely boyfriend of one of the daughters with equal aplomb. Tom Buderwitz’s set and Brian Gale’s lighting contribute substantially to the effort. GeffenPlayhouse.org.

Also on the Westside is a new one-man show that’s exemplary of the genre, Paul Linke’s “It’s Time,” at the Ruskin Group Theatre in Santa Monica through Dec. 4. You might not expect much from a 70-minute play with a guy standing on a piece of carpet talking about his life, in an intimate space about the size of a living room, but you would be wrong. This is a life well-lived and eloquently expressed by a master of solo performance.

Linke begins by reminiscing about his initial and much less assured foray into acting five decades ago in a class at USC before we get to “the main event.” Renowned for his show “Time Flies When You’re Alive,” about the death of his first wife from cancer at age 37—leaving three young children behind—the actor devotes this piece to the healing process that took place in the aftermath, and his second wife, Christine, who made his life and family whole again.

Though you won’t sit through it with a dry eye it’s an uplifting show that gladdens the heart, amidst the realization the clock is ticking perhaps faster than we admit to ourselves. Linke doesn’t try to suppress the emotions or the tears when they come and that’s part of the magic he brings to the stage, under the astute direction of his accomplice Edward Edwards—it’s one of the most honest and candid performances you’ll see all year. RuskinGroupTheatre.com.