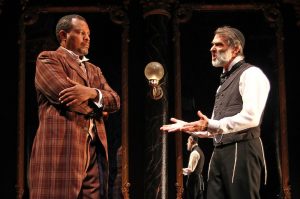 Don’t know much about Shakespeare? Steer away from productions and adaptations of his plays for fear you won’t understand them? Aaron Posner’s “District Merchants” – “inspired by ‘The Merchant of Venice’ ” – was written with you in mind. Set in “the theatrical 1870s,” the play (at Costa’s Mesa’s South Coast Repertory through Oct. 23) opens with Shylock, an Old World Jew, and Antoine, “a free man of color,” talking directly to us, and continues for the most part in plain every-day English.

This is a different animal from “Venice” that takes some unexpected twists and turns but preserves the essence of the original. Yes, you’ll hear Shylock’s “Hath not a Jew eyes?” speech and Portia’s “The quality of mercy” monologue, but you’ll understand them even if you don’t know your Shakespeare. You’ll also hear things you’ve decidedly never heard in any play of The Bard’s before, such as “I really like you and that scares the crap out of me,” and “You merciless mofo” (or rather its uncensored equivalent).

Ultimately this is a seriocomedy with a timely message—a plea for racial equality and religious tolerance that makes a powerful argument against bigotry and anti-Semitism. Best of all, Posner manages to do it without getting preachy. He’s aided and abetted by Michael Michetti’s attentive direction and a first-rate ensemble; the cast is headed by Matthew Boston as Shylock and Montae Russell as Antoine, with Akeem Davis shining in the small role of Lancelot. Visit Scr.org.