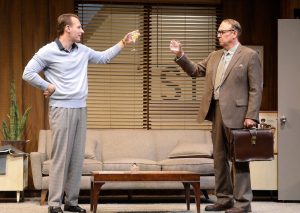 What would it be like if you could go back in time and watch Billy Wilder’s classic seriocomic film noir, “Double Indemnity,” in the making? Not on the set, mind you, but in the director’s office at Paramount Pictures as he puts together the script with legendary novelist Raymond Chandler? That’s the premise behind Mike Bencivenga’s “Billy & Ray” (now at Laguna Playhouse through Oct. 30). Set in 1943-44, it’s a clever comedy with some dark moments; your enjoyment of the show doesn’t depend on your familiarity with the film.

Laguna’s highly polished production is nearly flawless, except for one thing—Blake Ellis, the actor portraying Wilder, is about a foot too tall for the part. No doubt the filmmaker himself would voice an acid remark, scorching the backsides of all concerned were he here to witness the performance. Ellis, however, splendidly conveys the essence of Wilder’s acerbic personality and his Viennese accent is spot on. The script neatly captures his rapier wit though sometimes resorts to mere profanity, where Wilder’s invective was more inventive.

Nick Searcy’s gruff, avuncular Chandler is a great contrast to Ellis’ Wilder, as different as could be. There’s plenty of built-in conflict here, pointing up the smartest element of Bencivenga’s play. Above all this is a clash of personalities, a la “The Odd Couple.” Scott Lowell does what he can with the largely thankless role of producer Joe Sistrom; Joanna Strapp has some nice moments as secretary Helen Hernandez, and makes the most of them. Director Michael Matthews keeps things moving, no easy task on a stage this small. LagunaPlayhouse.com

I was fortunate to meet Wilder in the later years of his career and visit the set of two of his films, experiences I detail in “Directing Lemmon and Matthau: On the Set with Billy Wilder.” As to its merits I’ll just quote Walter Matthau’s son, Charlie, if I may: “I get sent a lot of this type of thing and it is refreshing to read something so well written and accurate.”

“The Making and Influence of ‘I Am a Fugitive from a Chain Gang’ ” by Scott Allen Nollen (newly available in paperback from McFarland & Co.) gives us an in-depth look at the memoir this 1932 masterpiece was based on as well as its author, Robert E. Burns. Nollen offers a fascinating account of the film’s production, for which the fugitive Burns served as an advisor. The many films “Fugitive” influenced, including “Cool Hand Luke” and “O Brother, Where Art Thou?,” are also discussed.

“Hal Ashby and the Making of ‘Harold and Maude’ ” by James A. Davidson (also available in paperback from McFarland & Co.) gives us the well-researched back story of the unlikely 1971 cult classic–how a neophyte Colin Higgins developed and sold the screenplay while working as a pool boy; how “acid freak” Hal Ashby, destined to become one of the era’s top directors, was assigned to take the reins; and how the box office bomb eventually became a money-maker.