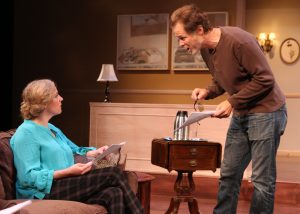 What does a writer do when she has something outrageous to say? If she’s Theresa Rebeck, she might put it in somebody else’s mouth and put that somebody center stage. As in “Seminar,” now careening across the Cripe Stage of the Chance Theater in Anaheim through Oct. 23. This edgy comedy set in Manhattan (where else?) gives you the vicarious thrill of being in a room awash with thinly-veiled snobbery, pretentious bull and monumental ego, without having to set foot in one—as I did when a renowned playwright invited me to sample his living room workshop in L.A. a few years ago.

Rebeck’s wildy entertaining five-character play is treated to a first-rate staging in its OC premiere. Ned Liebl heads the crackerjack ensemble, excelling as Leonard, the sharp-tongued hotshot know-it-all who can judge the whole of a writer’s worth on the basis of five words. Karen Jean Olds, Casey Long, Asialani Holman and Christian Telesmar more than hold up their end of the bargain with vivid characterizations of the aspiring novelists, whose hopes and dreams rise and fall with Liebl’s every breath on the craft—and crass—of writing. Elina De Santos cracks the director’s whip measure for measure. ChanceTheater.com

The 1955 Hitchock-like thriller, “Diabolique,” was once required viewing for cineastes. “Monique” by Dorothy and Michael Blankfort (now playing at Fullerton’s STAGEStheatre through Nov. 6) may not ring a bell, but it’s the play that inspired the French film classic and a slew of remakes. For a plot so cinematic it works surprisingly well in its original theatrical setting, at least in this rare staging skillfully directed by Rose London.

Sean Hesketh is more than credible as Fernand, the schoolteacher at the center of this noirish whodunit; Christine Cummings and Heather Enriquez are especially good as his long-suffering wife Lucienne and her doctor friend, Monique, who happens to be his mistress. Sam Tanng contributes a terrific cameo as a handyman. This is the kind of play that could be easily be given a wink-wink nudge-nudge treatment without a word being changed; to the credit of the director and her cast it’s played as it was intended, and works beautifully. Stagesoc.org