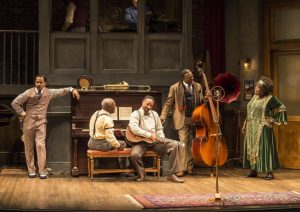 The cast of Ma Rainey; photo by Craig Schwartz.

“Ma Rainey’s Black Bottom” by August Wilson (at the Mark Taper Forum in L.A. through Oct. 16) is ostensibly about the titular personality known as “the mother of the blues” and the small group of jazz musicians who recorded “race records” with her in the 1920s. But it’s also about youthful ambition, racial equality, and the exploitation of black artists by white businessmen.

If you only know Phylicia Rashad (best known as Claire on “The Cosby Show”) as an actress, “Ma Rainey” may be something of a revelation. Rashad is an inviting performer, but she’s even more resourceful as a director if this Wilson dramedy and the playwight’s “Joe Turner’s Come and Gone” (a few seasons back at the Taper) are any indication. Wilson is best served by a director who possesses not only razor-sharp timing but a poetic sense of pacing, for those quiet moments when it only seems like nothing is happening onstage—and Rashad comes through like the proverbial Swiss watch.

Glynn Turman (Toledo), Keith David (Slow Drag) and Damon Gupton (Cutler) deliver delicately nuanced and layered portrayals of the veterans in the band; Jason Dirden (Levee) provides a nice contrast as a hotheaded young trumpeter who’s a little too progressive for the more seasoned members of the group. Lillias White (Rainey) is perfection as the earthy, stiletto-tongued pro at the center of the goings-on, who ain’t takin’ nuthin’ from nobody.

“Ma Rainey” is a finely etched and keenly felt portrait of an era when black and white rarely mixed, and the small grey area in between was never without tension. It takes place in a Chicago recording studio, unlike the Detroit neighborhood of the other plays in Wilson’s American Century Cycle, but is as potent and quietly profound any of them. For ticket information: centertheatregroup.org