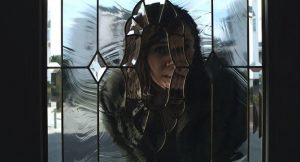 The Newport Beach Film Festival, which opens tonight, screens something like 100 feature-length narrative films. It’s a global grab bag of indies and studio flicks in every conceivable genre. Among the films this writer has previewed is “Colby” (showing Apr. 25), a strong and compelling first feature for its creators, Jake Fuller and Alex Markman, who collaborated on both screenplay and direction.

Colby is an attractive young lady who’s clearly Trouble with a capital T from the first moment of the film onward. She’s a liar and a manipulator looking for a free ride, conning her way through life using everyone she meets. She’s not a very likeable individual, and one who would seemingly get little sympathy from an audience. But Stephanie Brait, the actress who plays the part, is something of a con artist herself; she pulls you into this character-driven film and keeps you tuned in, rarely letting you catch your breath.

Viewers may or may not find a bit of empathy with George (Matthew Dixon), a guy whose beach house she breaks into before proceeding to worm her way into his family’s good graces. His teenage daughter, Samantha (Miranda Levitt), is likely to elicit a protective feeling from the audience when Colby offers her a rare taste of freedom from the parental cocoon. Both actors succeed in sustaining credibility in supporting but key roles.

Milos Jacimovic’s cinematography is exceptional; much of the picture is lit like a classic film noir, but he knows what a sunrise at the beach should look and feel like. The look is cold and gritty to heighten the suspense but warm and inviting when it needs to be, not unlike John Rankin’s score. They both follow the directors’ lead, working with a firm but unobtrusive hand.

At the finish we see the fragility behind Colby’s tough exterior. The film ends abruptly however, leaving it up to the viewer to write the story’s last chapter. That turn in the road didn’t quite work for me but in their favor the filmmakers stop short of preaching or moralizing, a path so often taken.