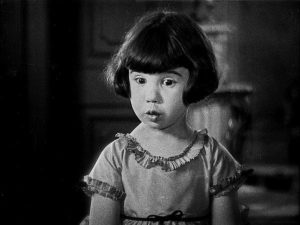 Baby Peggy in “The Family Secret”

Star Wars redux? No thanks. Charlie Chaplin on Blu-ray? More my cup of java. The Little Tramp was truly a Force to be reckoned with a century ago—arguably the most famous man in the world after a year of cranking out insane knockabout short subjects for Mack Sennett—and the Force is still with us on home video.

“Chaplin’s Essanay Comedies” (available in a 5-disc Blu-ray/DVD box set from Flicker Alley) includes newly-restored versions of the 14 laugh-provoking shorts he made for Essanay Mfg. Co. in 1915, before graduating to his more mature Mutual shorts and popular feature films. Bonuses include new scores and a booklet with rare images authored by Jeffrey Vance.

While Harold Lloyd’s films are newly available on iTunes, another onetime Chaplin rival has been unearthed from comparative obscurity. “Larry Semon, Daredevil Comedian of the Silent Screen” by Claudia Sassen (in paperback from McFarland & Co.), the result of 30 years research by its indefatigable German author, represents the first biography of the near-forgotten funnyman whose best work remains difficult to view. The book is impeccable however, including a detailed filmography compiled by Sassen and Patrick Skacel.

Happily, the films of Baby Peggy (Diana Serra Cary), the last surviving silent film star, are becoming easier to see. “The Family Secret” (available on DVD from Undercrank Productions), is a 1924 gem newly restored by the Library of Congress. The impish little charmer—whose facial expressions are priceless—is also present in two rare shorts and bonus newsreel footage, all with splendid scores by noted accompanist Ben Model.