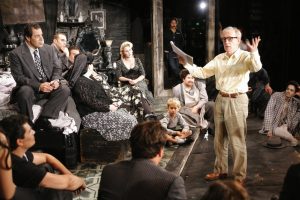 A night at the opera is always a special occasion in So Cal. L.A. Opera’s 30th season opener, an inspired double bill of Puccini’s “Gianni Schicchi” and Leoncavallo’s “Pagliacci” at the Dorothy Chandler Pavilion, was worthy of any and all the superlatives one could lavish upon it. Woody Allen’s trademark wit was evident in his production of the former but he respected the form. Staged by Kathleen Smith Belcher with a set by longtime Allen associate Santo Loquasto and starring Placido Domingo in the title role, it’s hard to imagine a better “Gianni.”

Franco Zeffirelli’s production of “Pagliacci,” for which he designed the set, could only be described as spectacular. Conducted by Domingo and staged by Stefano Trespidi, there’s so much going on at times—with approximately 125 performers on stage—the eye almost doesn’t know where to look at first. Ultimately, it is as compelling, and devastating, as Shakespearean tragedy at its best. Highlights of L.A. Opera’s 2015-16 season include “Moby-Dick” (Oct. 31-Nov. 28), “The Magic Flute” (a revival of its acclaimed “silent movie” version, Feb. 13-Mar. 6) and “Madame Butterfly” (Mar. 12-Apr. 3).

Woody—who celebrates his 50th year in films this year and his 80th birthday in December—is also the subject of Alex Sheremet’s new “Woody Allen Reel to Real” (an ebook available from Take 2) is an in-depth attempt to evaluate the work of the prolific writer-director, as well as the film critics’ take on his efforts, pro and con. Allen himself would probably dismiss the need for such a book, but apart from the amateurish cover this is a worthwhile effort; indeed, Sheremet makes a case for some of Allen’s most neglected and critically maligned films.

If sex, drugs, and rock ‘n’ roll is a logical troika, how about sex, drugs and…the fall of Saigon? Qui Nguyen is an award-winning playwright who seems to think so, and South Coast Repertory’s world premiere production of his play “Vietgone” (through Oct. 25), an amorous love story set amidst the chaotic fallout of the Vietnam war, serves to prove the point.

Nguyen’s seriocomic drama is bold and profane—perhaps too much so for some of SCR’s older or more conservative patrons—but it’s a wild and rewarding ride for those who can handle it. The dynamic cast, especially Raymond Lee and Maureen Sebastian (as a couple who meet in a refugee camp in Arkansas) and Samantha Quan (as her mother and other characters), have a chemistry that makes it work under May Adrales’ energetic direction.