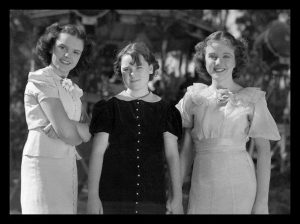 Judy Garland, Patricia Palmer and Deanna Durbin on the set of Every Sunday (1936).

It would be easy to miss “Cartoon Roots,” Tommy Stathes’ new release on his independent Cartoons on Film label, but this Blu-ray/DVD combo deserves attention from anyone interested in animation. It gets off to a rough start with racial stereotypes in “Lightning Sketches” (1907), but this collection is packed with gems that more than make up for it—including efforts by Max & Dave Fleischer, Walter Lantz, Paul Terry and other pioneers of the art form.

“Cartoons on Tour” (1915) and “Col. Heeza Liar, Detective” (1923) are early attempts to combine live action with animation, the latter especially well done. Mutt and Jeff are on view in “Fireman Save My Child” (1919), Koko the Clown in “The Circus” (1920), and Krazy Kat in “Scents and Nonsense” (1926); “Farmerette” (1932) offers an amusing Betty Boop knock-off. Steve Stanchfield did the admirable restoration; Robert Israel and Ben Model provide wonderfully entertaining new scores.

Warner Archive releases more must-have DVDs than this reviewer can keep up with, but “Classic Shorts from the Dream Factory, Vol. 2” is required viewing for vintage film fans. The terrific “Every Sunday” (1936), an apparent audition for two youngsters named Judy Garland and Deanna Durbin, is the best known film in this 3-DVD collection packed with forgotten treasures from the MGM vaults.

Highlights among the 36 short subjects include a very young Jack Benny in “The Rounder”; the singing Dandridge Sisters in “Snow Gets in Your Eyes”; “Streamlined Swing,” directed by Buster Keaton; and the Oscar-winning “Heavenly Music,” a mini-musical comedy about a swing bandleader trying to get into the Pearly Gates. Up-and-coming MGM players like Ann Rutherford, Lana Turner and George Murphy are featured, along with such beloved character actors as Billy Gilbert.

Dziga Vertov may be an obscure name even to aficionados of classic film, but his visually spectacular 1929 masterpiece, “The Man With the Movie Camera,” is unforgettable. The camera is an extension of the human eye in this documentary, in which it attempts to capture “the chaos of visual phenomena filling the universe.” Flicker Alley has recently released it on Blu-ray—where it can be seen in its entirety for the first time since its original premiere—along with other restored works by the filmmaker. “Man” features striking musical accompaniment by Alloy Orchestra.

Chances are you’ve never heard of “Death Kiss” (1932) but this Pre-Code whodunit from Poverty Row studio Tiffany (available from Kino on DVD) is highly watchable, and moves like greased lightning. Bela Lugosi (seemingly miscast as a studio head) is reteamed with “Dracula” co-stars David Manners and Edward Van Sloan; Vince Barnett supplies the comic relief. The erudite commentary track by Richard Harlan Smith is worth the price of the disc by itself.