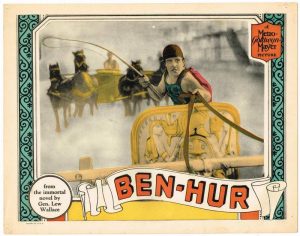 Silence, please! It’s almost time for the 20th annual San Francisco Silent Film Festival, slated to run May 28-June 1 at the City by the Bay’s wonderful vintage movie palace, the Castro. And this writer will be making his first visit to the fest, having decided he’s not getting any younger.

The event opens with the proverbial bang, the long lost alternate silent version of “All Quiet on the Western Front” (1930). Recently restored by the Library of Congress, the opening night presentation will feature a new score and live sound effects by the Mont Alto Motion Picture Orchestra—which will provide musical accompaniment for films throughout the festival, as will Donald Sosin and others.

Another highlight is “Sherlock Holmes” (1916)—one of the so-called holy grails of lost films—starring William Gillette, the foremost interpreter of the fictional detective on stage. Professor Russell Merritt, supervising editor of the film’s preservation project, says, “There’s not an actor dead or alive who hasn’t consciously or intuitively played off Gillette.” Flicker Alley has just announced it will release the Blu-ray/DVD premiere of the film in October.

Among other films being shown are F. W. Murnau’s “The Last Laugh” (1924), starring Emil Jannings in one of the great performances of all time; Harold Lloyd’s “Speedy” (1928), which includes a cameo by Babe Ruth; Colleen Moore’s delightful “Why Be Good?” (1929); and four shorts by unjustly forgotten comedian-animator Charley Bowers.

A real oddity is an untitled and unreleased film project shot in 1913 and abandoned mid-production, with a cast of black actors headed by famed entertainer Bert Williams. The Museum of Modern Art will present an hour-long assemblage of daily rushes, multiple takes and still photos.