Where to dine before the show—Scott’s Restaurant, Costa Mesa 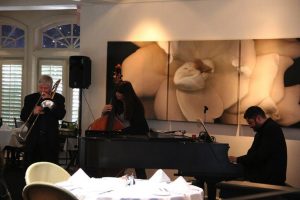 Few things go together as well as jazz and brunch, especially when you do both as well as Scott’s Restaurant & Bar, across from South Coast Plaza in Costa Mesa. Having patronized the establishment with great satisfaction before a show at South Coast Repertory—or was it Segerstrom Center for the Arts—whetted my appetite for their Sunday Jazz Brunch, which would of course pair perfectly with a matinee. (And yes, for you last-minute planners, Scott’s is serving a Mother’s Day brunch, with the George Gilliam Trio featuring pianist Llew Matthews.)

The Hokkaido Scallops, flown in from their island namesake in Japan, are scrumptious enough to kickstart your repast in style. But the signature appetizer (abundant enough for four) is Scott’s Calamari. It’s so sharp and tangy it almost jumps off the plate as if to say, “Hey, how you doin’?” – or was that the event’s affable host, Bubba Jackson, who’s every bit as personable as he is on Long Beach jazz station KKJZ 88.1?

The Lacinato Kale and Beet Salad, with Medjool dates, almonds and goat cheese, looks almost too good to eat and tastes as good as it looks. The wonderfully savory Wood Fired Shrimp is a more substantial beginning but leaves less room for the entrée, and you do want to leave plenty of room. My suggestion is to dine in no less than a group of four, to taste everything that beckons you from the menu (two is a more intimate number, of course, but could lead to frustration).

If you’ve never had Pulled Pork Pancakes, with the sandwiched between two hotcakes topped with a fried egg and slathered with maple syrup, you haven’t lived. The Spicy Linguica Hash, made with Portuguese smoked pork sausage, Gulf shrimp, potatoes and peppers, served with a side guajillo chile scramble, is as delectable as it sounds. The Shrimp Cake Benedict, while perhaps more appealing to those on a diet, was a disappointment—the only one on the menu.

If you’re a bit full after the entrée, you may be inclined to skip the oh-so-tempting Cheesecake Stuffed Beignets (complete with fresh strawberries, caramel sauce and powdered sugar), and that would be a shame. It may be the most delicious OMG moment you’ll have all day—and there are more than a few thanks to exec chef Mike Doctulero and chef de cusine Porfirio Gomez.

As for the music, it’s notably softer that the typical restaurant entertainment; you won’t be asking them to turn it down a notch. Jennifer Leitham, the superb bassist we heard last week, promised Bubba Jackson she’d return for an encore; meanwhile, Llew Matthews (May 17), saxophonist Jerry Mandel (May 24), pianist George Kahn (May 31) and pianist Ron Kobayashi (June 7) are slated to perform; jazz singer-pianist Carol Welsman is scheduled for a two-evening appearance (May 29-30). For reservations, call Scott’s at (714) 979-2400.