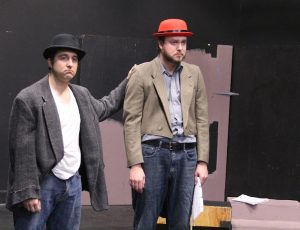 Jonathan Durante and Jeff Lowe in “Waiting for Godot.” Courtesy of Alchemy.

Jesse Runde is an Associate Faculty Member at Fullerton College and a co-founder of Orange County’s Alchemy Theatre Company. Her efforts have been seen on stages throughout Orange County; last year she directed the work of Eugene Ionesco at STAGEStheatre and Gertrude Stein at Theatre Out. Runde took a break from rehearsals to talk about Alchemy’s current production of Samuel Beckett’s “Waiting for Godot,” slated for Mar. 20-28 at Theatre Out in Santa Ana.

Q: “Godot” is a play you’ve always wanted to direct, Jesse. What drew you to it?

A: My interests have started moving away from traditional scripted theatre as of late, but the idea of directing “Godot” appealed to me because I’ve always thought of it as a sort of stage poem.  The script is somewhat spare, despite being full length.  Beckett gives you just enough and no more, which makes it a real challenge to fully illuminate while still keeping it porous enough to allow the audience to bring their own personal understanding to bear on the experience.

Q: People who don’t know the play might be a little hesitant to check it out. Should they be?

A: Not at all…not at all…not at all. It’s not all doom and gloom, as some might expect. In fact, I would say the plot is quite a demonstration of hope in action, and of friendship, which is touching.  There’s also a fair bit of humor in the text, and we have a fine cast of actors who handle it deftly.

Q: How accessible is Beckett for the average theatergoer? Isn’t he a little obtuse?

A: Beckett is perhaps a bit like Shakespeare in that there are various circles of awareness in which a playgoer may indulge—one needn’t understand every obscure reference or have a working theory of the play as a whole to glean something from a performance, or to enjoy it on some level. Much of Beckett’s humor is scatological or revolves around our mortality; we all understand these things on a fundamental level, so if you can plug into that, you’ve got a good start in comprehending the universal quality of his work.

Q: What’s the biggest challenge for you in doing Orange County theater, Jesse?

A: It’s the balancing act of wanting to produce the obscure shows, the new scripts, the experimental theatre that truly excites me, and needing to produce plays that we think can help pay for those shows.  The traditional wisdom in OC is that audiences don’t want to see and hear new work, or avant-garde work, even if it hasn’t been avant-garde for over 50 years.