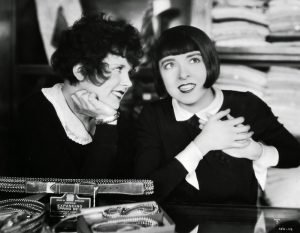 Among the highlights of the 2015 TCM Classic Film Festival for silent film enthusiasts are Buster Keaton’s “Steamboat Bill, Jr.” (1928) with a live score by Carl Davis, and the world premiere restoration of “The Grim Game” (1919) with Harry Houdini. An illustrated presentation on “The Dawn of Technicolor” at the event—to be held Mar. 26-29 in Hollywood—will cover the development of the two-color process from 1915 to 1934.

Colleen Moore, who’s almost as obscure as Keaton and Houdini are famous, will also be present at the TCM fest in “Why Be Good?” (1929). Her last silent film is a delight from start to finish and its recent rediscovery is a cause for celebration—ample proof Moore should be better remembered. Recently released on DVD by Warner Archive, the film boasts a snappy jazz soundtrack that’s worth the price of the disc by itself; such talents as Jimmy Dorsey, Joe Venuti and Eddie Lang are believed to have contributed to the score.

This forgotten gem stars Moore as Pert Kelly, a vivacious “hot potato” who epitomizes the flapper era. Little does she know the nice guy (Neil Hamilton) she meets at a club is her wealthy boss’s son, nor does he realize when he falls for her she’s a salesgirl in their department store. Not knowing she’s a “good girl” who lives at home with her parents, he puts her morals to the test. Jean Harlow and other up-and-comers appear in unbilled bits; the film is smoothly directed by William A. Seiter, best known for Laurel and Hardy’s “Sons of the Desert.”

Yet another rare silent comedy featuring a half-forgotten comedian has recently materialized on home video. “Flying Luck” (1927) stars Italian-born Monty Banks in one of his last silents, and a young Jean Arthur, yet to find the voice that would bring her into renown. Banks is an inept little fellow who resembles Chaplin and worships Charles Lindbergh in this aviation-inspired comedy, available on DVD from Undercrank Productions with an original score by Ben Model.

Most of the humor derives from situations in this highly entertaining feature, with Banks getting talked into enlisting in the army, blundering his way through training and falling victim to the practical jokers in his platoon. Kewpie Morgan is his nemesis as a tough sergeant; Lindbergh himself appears in the bonus material, a series of newsreels chronicling his historic 1927 flight from New York to Paris.