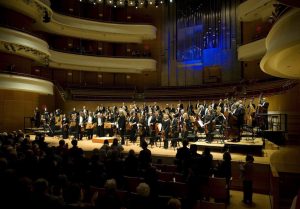 How many times can Hershey Felder pull off the hat trick of writing and performing a play for one man and a piano? An infinite number I’d guess, judging by his latest effort, “Hershey Felder as Irving Berlin.” Admittedly I found the opening a bit contrived, with Berlin talking to an elderly version of himself represented by an empty wheelchair; otherwise, the show (running through Feb. 8 at Laguna Playhouse) was near perfect.

Felder not only nails the legendary songwriter’s Russian-Jewish accent and plays the hell out of the piano—unlike Berlin, who could only play in the key of F—he sings more than a dozen songs, and sometimes invites the audience to join in. He includes not only the obligatory “White Christmas” and “God Bless America,” but love songs (“Always”), pop hits (“Cheek to Cheek”), and novelty numbers (“Oh! How I Hate to Get Up in the Morning,” a World War I ditty).

The enterprising actor-playwright gives a real feel for the composer’s personality, embracing the character’s Jewishness and his patriotic fervor for his adopted country. Felder also goes to the dark and unexpected places, talking about Berlin’s flops and the tragedies in his life, and discussing the derivation of ethnic slurs he would’ve faced in early, more anti-Semitic times. Trevor Hay directs unobtrusively. Call 949-497-2787 or visit www.lagunaplayhouse.com.

There were moments of unexpected hilarity worthy of Victor Borge when Itzhak Perlman teamed with Carl St. Clair and the Pacific Symphony last weekend at the Segerstrom Center for the Arts. Once when Perlman was handed his violin and turned it over to inspect it, and earlier in the evening when St. Clair entered to conduct the Suite from Stravinsky’s “The Firebird” without his baton and had to go back and retrieve it.

Perlman played Beethoven’s one and only violin composition—Concerto in D Major for Violin & Orchestra, Op. 61, that is—as perhaps only he could, taking time to coax nuances out of his instrument that only a master would even sense were there. To witness the few precious moments with Perlman and St. Clair closely interacting, and the unbridled joy with which they played in celebration in the music director’s 25th anniversary, were worth the price of admission alone.

Clearly, it was a special occasion. When Perlman could play virtually anything and draw the same crowd, however, one would like to hear him play a lesser-known work. St. Clair and company gave perhaps as fine a rendition of “Firebird” and Berlioz’s “Roman Carnival Overture” as I’ve heard live.