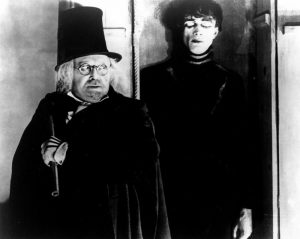 Before the Nazi era reared its ugly head, German artists and filmmakers astonished the world with a series of Expressionist classics that continue to exert their influence. L.A. County Museum of Art’s “Haunted Screens: German Cinema in the 1920s” (continuing in LACMA’s Art of the Americas Building through April 26, 2015) explores the innovative masterworks of the Weimar Republic.

The exhibition, organized by La Cinémathèque française in Paris, features over 150 drawings, plus manuscripts, posters, and set models, much of it collected by pioneering film historian Lotte Eisner. A three-screen installation shows sequences from lost films of the Expressionist era. The exhibit is presented by LACMA in association with the Academy of Motion Picture Arts and Sciences; both organizations contributed archival materials for display.

One of the most famous—and most unforgettably stylized films of the Weimar period, “The Cabinet of Dr. Caligari” (1919), hits the video shelves today in a sparkling new 4k restoration, scanned from the camera negative. The Robert Wiene classic, starring Werner Krauss and Conrad Veidt (who would later play Major Strasser in “Casablanca”), is available from Kino Classics on Blu-ray and DVD; it’s also available on VOD via iTunes this week.

Seems like I’ve been waiting forever to see a decent-looking print of “Caligari,” and I’m delighted with the visual quality. This edition of the hugely influential film comes with a booklet essay by historian Kristin Thompson, a documentary tracing the production of the landmark film and its legacy, an image gallery of stills, and a before-and-after restoration demo.

Something many legendary films of the pre-Nazi era have in common is the studio where they were shot. “100 Years Studio Babelsburg: The Art of Filmmaking” (available in hardcover from teNeues publishing) is a handsome coffee table book devoted to the world’s oldest large-stage studio—where Fritz Lang’s “Metropolis,” F.W. Murnau’s “The Last Laugh,” Josef von Sternberg’s “The Blue Angel” and many other films were made.

Babelsburg was turned into a propaganda machine during the Third Reich, an era the heavily-illustrated volume examines in detail. While such worthwhile contemporary films as Roman Polanski’s “The Pianist” have been made at the studio, a disproportionately large part of the book is devoted to them.